Do you ever have a tendency to lose focus?  I do.  It started to become more and more evident during my Ironman training.  One afternoon, I was running by myself, a seven my mile run, very hilly loop in the country.  The first two and half miles include about 350 vertical feet of climbing.  I started out great around an 8:30 pace.  For me it is great and I managed to keep it sub 9-minute miles through the first half of the run. 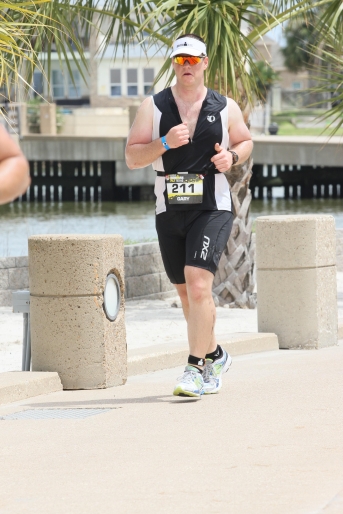 The run flattens out nicely for the middle part and finishes off with more climbing.  What was fascinating, was as I was running on the flatter portion of the run, I looked down at my watch and found my pace had gone to around 10:30 a mile for the middle part of the run.  I was not breathing hard.  My heart rate was in the mid 130’s.  I was fine and so I picked my pace back to finish out my run.

So why does it matter?  Do it too often and you aren’t getting better, your just going through the motions to do them.

Is it possible this happens to us from time to time in our walk with Jesus?  We simply lose focus.  Things get easier; we “get the hang of it.”  We start doing things not push our self and grow but simply to do them because we are “suppose to.”

We have to learn to become nearsighted and farsighted at the same time.  I know that makes no sense, but it is important whether you are an athlete, a leader or a follower of Jesus.  I was far sighted.  My mind was set on April 7th.  All I knew was I would step up, well actually swim up, to the starting line of a 70-mile race and if I were not prepared, I would not make it.  A date had become my focus.  The problem was I began just doing all the things needed to get ready for the date, rather than focusing on all of the steps in the journey and getting better along the way.

Toward the end of my training, about 3 weeks away from the race, another swimmer at the pool I train at name Chris put it in perspective for me.  Chris is a great athlete; he is in his mid 50’s probably and has done some amazing endurance events including super marathons and full Ironman’s.  I asked Chris one day what his next big event was going to be.  He looked at me and said, “well I am going to swim the best I can to the other end of the pool and then I am going to swim back.”  I was expecting to hear, I am doing a marathon or an Ironman but his entire focus was on swimming the next 50 yards in the pool.

It occurred to me maybe I had missed the point of my training.  It was not to just do it; it was to get better.  Maybe we do the same in our walk with Jesus.  Focusing so much on the big picture and how the journey ends that we miss out on growing through all the little steps along the way.  The reason we read scripture is not to know the Bible better but to know Christ better.  To understand his will.  To spend time with him simply because you are hungering and thirsting for Him.

God feared this would happen to the Israelites, he feared they would lose focus.

10 When you have eaten and are satisfied, praise the Lord your God for the good land he has given you.11 Be careful that you do not forget the Lord your God, failing to observe his commands, his laws and his decrees that I am giving you this day. 12 Otherwise, when you eat and are satisfied, when you build fine houses and settle down, 13 and when your herds and flocks grow large and your silver and gold increase and all you have is multiplied, 14 then your heart will become proud and you will forget the Lord your God, who brought you out of Egypt, out of the land of slavery. 15 He led you through the vast and dreadful wilderness, that thirsty and waterless land, with its venomous snakes and scorpions. He brought you water out of hard rock. 16 He gave you manna to eat in the wilderness, something your ancestors had never known, to humble and test you so that in the end it might go well with you. 17 You may say to yourself, “My power and the strength of my hands have produced this wealth for me.” 18 But remember the Lord your God, for it is he who gives you the ability to produce wealth, and so confirms his covenant, which he swore to your ancestors, as it is today.

In the last few weeks we have seen the Boston Marathon bombings, a Fretilizer Plant explosion in West, TX, have good friends who lost a child and others trying to understand the magnitude of a young father suffering with cancer.  It hurts me to see so many others in pain and I rush to say, “God where are you.”  Maybe his response would be the same as it was for Israel.  I am their leading you through this vast dessert.  Notice, God did not take Israel out of the dessert He led them through it.  And there is a huge difference.  He provided for them in the midst of their struggles, but he did not take their struggles away.

Maybe it is not until God has led us through the pain and heartache of the dessert that we are able to look back and see his finger prints all over canvas of our life.

Have you see the new reality TV show “What Would You Do?”  It reenacts everyday situations to see now people will handle them.  Will they say something to someone or do the right thing?

I have taken a few days to get away in Glen Rose, TX.  To think, pray, read and write.  It has been an incredible few days.  This morning I worked, showered, got dressed and ran into town to Subway for breakfast.  When I went into the store, I had $58 in my pocket.  I paid for my food and headed back to the retreat.  Around lunch time, I realized I was missing $40.  So I began retracing everything I had done, which by the way, did not take long since the only places I had been were outside on the patio overlooking the Brazos River and to Subway.  I check the floor of my room and my car, nothing.  So I called Subway just to see if they found anything.  The lady on the phone said no and she was sorry I had lost the money.  So I kept looking.  A couple minutes later Subway called back and said, she was talking with the manager and they had found my money.  When I went into get my $40 the manager said a lady saw the money laying on the counter in front of the register and pointed it out.

We all know people who we think they have strong character, but do they.  I am not saying they do not.  I am suggesting maybe we can not be so sure.  It is easy to be a person of great character when people are watching.  When everyone can see it is easy to make the right choice.  Character is defined by what people do not see.  Character is the decisions and the choices you make when no one else can see.  In 2 Peter 1:5, Peter tells the Christians they are to make every effort to grow in virtue (ESV) or goodness (NIV) For this very reason, make every effort to supplement your faith with virtue.  The virtue or goodness Peter is referring to moral character.  Are you growing in character and morality?  We should constantly be striving to do right, to make the right choices, not just when people are watching but when no one knows.  Your character is defined by the decisions you make when no one else knows.  You are the only one who knows if you are truly growing in this area.

Error: Twitter did not respond. Please wait a few minutes and refresh this page.